Lilly Lu at the bridge By mama Laura

I wanted to write a little something for Lilly Lu. I tried a few times to put my thoughts down but land up crying so this might come out a little Random

Lillian Kayla Maire AKA Lilly Lu was named for her very special vet Dr Lillian Cornjo who took great care of her. for many years.

When Lilly was a kitten she would always sleep on my bed. She was returned 3 times for bad nigh time behavior she was going to go to rainbow bridge but a little blue bird told me to stop at that shetter where i found her. There she was a cat named "snowball" white with these cute little black spots on her head. I was in love we bonded over a can food that she had not eaten and then ate. she was only 7lbs you could see her ribs.

Lilly lu was never a cuddly lap cat she like to have her feet on the ground did not like to be picked up. She did love to be petted mostly on her black spots on her head and under her chin. She would wait on the stairs every night till everyone came up to make sure they patted her and said good night to her.

Lilly Lu was very fussy when it came to he box she did not like the feel of litter on her paws she also would pop out side the box if it would not up to her snuff. I know i need to completely change the box when she would uses the floor. when she went to use the box she stand up on the sill on the box as not to get her paw in the litter and then just leave as fast as she could.

Lilly Lu was know for her love of pink and her fashion ever since she was a kitten she was drawn to pink stuff. She loved to sleep in her pink crown bed I always called her queen Lilly Cat because she was queen in my heart and queen of are house hold.

Lilly fashion modeling happen when i saw Skeezix blog and i got a 1.00 tee shirt to my suprize she love modeling and would come running every time i pulled out a new outfit. She loved trips to the vet were she come in style in her pink case and her outfit of choice and proudly show off . Her last dress was in February were she was declared in perfect health. If only it was true. She proudly showed off for everyone.

Lilly Lu faviort food was ice cream whipped cream and pudding all of a spoon. Any time i eat something off a spoon she come running she had a tomato soup stain on her ear because last week i was eating some and she was begging for it so it got on her ear by mistake. Her last ice cream was last Friday were we shared a sugar free ice cream. I was not planing on shearing but she was and she made it know to me that she was planing on helping me out with her most favorite treat.

If i could not find LL all i had to do was shake a bag of geenies and off she come running she ate them for the last time at tufts in the waiting room.

This whole thing was very sudden and very unexpected. She was fine on Sunday she missed her dinner very un Lilly Lu and she was very sound a sleep this was not unlike her. Monday morning she did not eat bresfest I called tufts thinking URI she was breathing a bit heavy. I made a 1:00 Pm appointment with Dr stone since Dr C was not there. I agree to a chest x-ray and to go from there he was sure it would be a URI too.

She had fuild on her lungs and he said it need to be removed it was and a few hours latter it was found to be cancer I wanted to take her home did not want her to suffer i did not think she was suffering at the time.

She came home and was not LL she hid but ate a full can of food. By 9:30 she was back to rapid breathing and i knew. I made phone calls and I vowed not to let her suffer I called tufts and asked for records to be sent since when i called to make the appointment at a clinic i would never go back to they said they need conformation. Dr stone called at 10:00 i told him it was time i need records to be faxed over I had a 11:30 appointment He made the calls and when I got there about 11:15 and by 11:30 the vet came in we talked about what was going to happen she went to the bridge in her two most favorite pink blankets she was having trubble walking so i knew i had to give her the final gift I could.

Lilly Lu was more than just my cat she was a cat of the whole blogophire being saved twice by the kind people of the CB. For her final gift I would like to ask for help once again not to pay her final existence i really want to pay for this my self. But to help with her Legacy. Lets put an end to Feline cancer please donate to Feline Winn in her honor. Lets help other cats and lets learn from LL and how much love we all have to share. 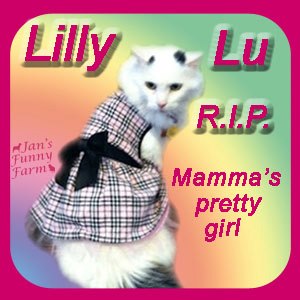 She will be layed to rest next to mu shue at Pine ridge cemarety tomrowo funny thing is it is Mu shue purr day and Gota day. I guess they just both need me to vist each September
Posted by Lilly Lu, Iris and Maxwell Mufsa Millon at 8:28 PM 22 comments: Links to this post

Lilly at the bridge 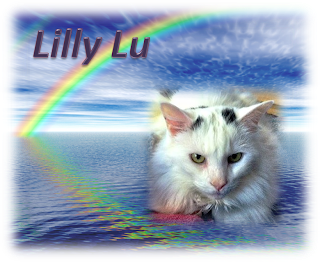 Lilly Lu has cancer she had fuild drained off her chest we will keep her confrebal for the time being follow us on facebook for more infor
Posted by Lilly Lu, Iris and Maxwell Mufsa Millon at 7:32 PM 5 comments: Links to this post

I am Moving Lilly lu 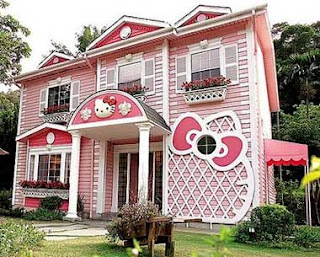 Well since Maxie is a pain and i not found of iris mikey or callie rose i have deseed it was time to take on home owner ship i browwed mama cat it card and bought my self a new place to live all for me I love it it is toatly me. I think i might have to fight skeexix off but i let him stay in one of my hello kitty gussess bed rooms. By the way there is a geenie bar there severubg greeines in the shape of HK her self
Posted by Lilly Lu, Iris and Maxwell Mufsa Millon at 7:24 PM 3 comments: Links to this post

I am a cow cat 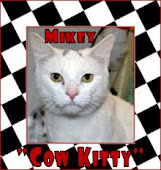 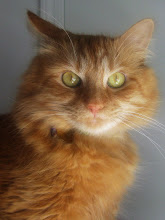 Hi I am Maxie ... I was a gift from a king to my mama Laura Lilly Lu and iris I add excitment to a broning house i like to sleep and eat and play I love yowal catnip and get pretty nipped out

Maxie was a perfect normal heathy man cat till he went to the dentist on May 20. I knew something was wrong the min I picked him up but I was asured it was nothing turns out under anstina in a ralexed state maxie vomited a hair ball. The hair ball sat in his epousous up to 3 hours and bruned his whole ephougous. we are parying for a Merical for Maxie.

Update; Maxie has been Healed he can eat normaly we been granted a merical form a king in the form of Maxie he learn to cuddle not a lap cat by any means. We are very lucky to have Maxie in are lives we love him so

Help Maxie we have over 6,000 in vet bills maxie will now need life long care

A fund raiser for my vet bills

My Pray blog come see all the cat praying for me 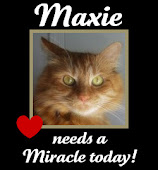 Maxie on Catster too

Maxie Is a man cat 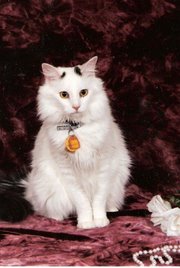 Hi i am Lilly Lu My real name Is Lillan Kayla Maire but I only get called that when I am in trubble I go by Lilly Lu. I am about 5 years old and am a white cat with deistictive black spots and a black tail with a tinny drop of ornoge underneth. I have Lived with Mama Laura and Mu shue since I was 10 mouths old. I was from The MSPCA I am a shy cat who is very bonded to My mamma I do not sungle but I want to be in the same room as her and will often cuddle up in a cat bed next to her bed.

I am a spotted Cow cat 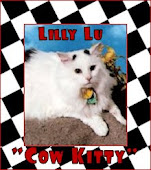 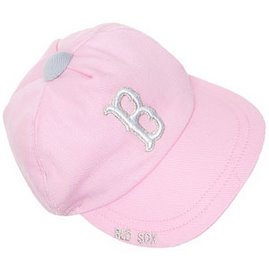 the sox are going to win it all this year

Callie Rose is named after Artsy catys Callie who passed to the bridge. Lilly is is best freind with Rocky so it made she also named after Mu shue long time wife and good freind Muffin Marie. Callie had a hard time she used to have a forever home she was declared and her owner died so her owners family thow her out on the street to fend for her self she made freinds with a shelter volntree who brought her to a no kill shelter Mama Laura saw somthing in her on one else did and fell in love with her and bought her home. Since being home she become a cuddle bug and very and has a great purr. She a lover not a fighter She gets along well with all the cats because she often lets them have there way. She becoming found of Maxie and always gives into his wants

We miss you Mu shue 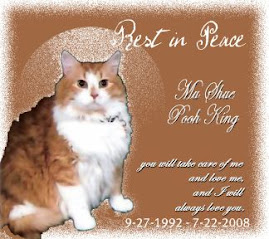 Mu shue is foever in are hearts 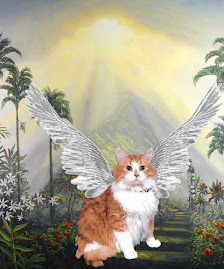 Mu shue's blog we miss him so

A brother a best freind a hero 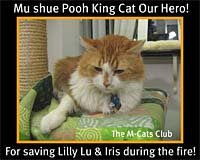 Mu shue you will alway be my hero

I was Kat of the Day 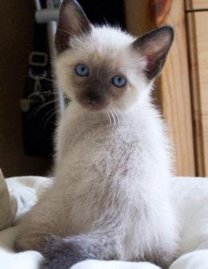 Iris is all about Fun she love to be in the middle of everything and loves attenon she loves the girls the most and can often be found around are daughter M. She is great Friends with Maxie and Mikey her favorit toys are toy mousie anything with feather and wadds of computer papper

We our members of the Pink Ladys 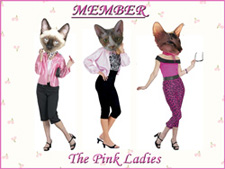